Of course, if email optimization was easy, everyone would be doing it. The gap between those using analysis effectively and those who are just “winging it” suggests that there’s still plenty of opportunity for most salespeople to improve their cold email results.

The Challenge with Cold Email Testing

One of the fundamental building blocks of a cold email optimization campaign is the A/B test, in which two variations of an individual message are sent out in order to determine which one results in more conversions.

A/B testing is used frequently in the marketing world to compare the performance of landing pages and other web elements. In the case of cold emailing, testing different subject lines, opening lines, CTAs, button texts and other variables can help your future messages perform better by honing in on the combinations most likely to produce a response among prospects.

That said, one of the challenges associated with traditional A/B testing is that you need a sufficiently-high sample size to prove the statistical significance of your results.

Statistical significance is your ability to determine whether or not the results you’re seeing are due to random chance or to the variable you’re testing.

Imagine flipping a coin. With every flip, you have an equal probability of getting heads or tails. However, if you only flip your coin a few times, you could get a skewed sense of probability compared to carrying the same experiment out thousands of times.

That doesn’t mean that A/B testing isn’t useful when sending cold emails. You can still gain useful insight from split testing, though it’s important you understand how to collect it effectively and how to make informed decisions based on your results.

How to Optimize Your Cold Emails: A General Process 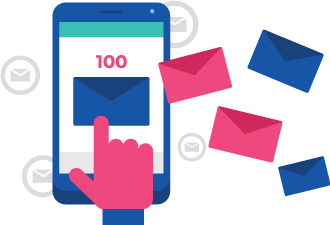 Since classic A/B split testing measures don’t apply neatly to cold emailing, think of your general goal as this: to send small batches of messages in order to see what works before scaling to larger audiences. Basically, send your message to 100 people and work out the kinks before sending it to 5,000.

Set a baseline for your optimization efforts, depending on the specific type of conversion you intend to track. We touched on this back in Lesson #1, but generally, this means tracking open rates, click-through rates or response rates.

There are two ways you can set your baseline metrics:

If you’ve been tracking your target metric, you may already have a baseline in mind. For instance, if you’ve been seeing a response rate of less than 1%, that’s a great starting point for your future optimization efforts. 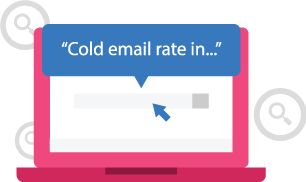 If you don’t know where you currently stand, you might find it easier to set your baseline at industry averages (if they exist in your field). Find a starting point by searching the web using queries like:

Leadfuze, for example, reports that the average cold email response rate is less than 1%. A question posted to Startups.co suggests an average conversion rate of 0.5%.

Yet again, I’m going to caution you not to overthink this.

Pick a number that feels right based on what you know of your own cold email performance and average standards in your industry. You’ll revise it anyways after your first test gives you real data to work with..

Next, you need a goal to work towards. For example, you might aim to improve open rates by 10% or your response rates by 5%.

Pick a number that represents a modest improvement over your baseline. As you run different tests, you can make future goals more aggressive or dial back your expectations if you aren’t seeing the desired results.

Step #3: Design and Run Your Experiments

When it comes to test design, you have two options: testing large, sweeping changes vs. making smaller tweaks.

For example, say your goal is to increase your open rates by a huge margin. In this case: 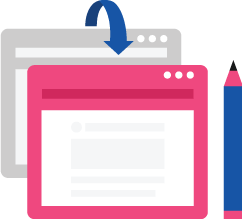 Design the experiments that are most likely to get you to your stated goals. Need big improvements? Test big changes. Need to refine an already-successful message? Think smaller.

It’s also an A/B split testing best practice to test a single variable at a time. If you tweak your subject line, your greeting, your CTA and the inclusion of a P.S. all at once, how will you know which variables contributed to the change you’re seeing?

If you aren’t sure which single variable to test first, use the questions below for ideas.

This isn’t a comprehensive list of possible testing factors. Instead, use these questions to get inspired about all the different opportunities for improving your cold email performance.

Let’s put all this into practice. Assuming you believe weak subject lines are causing your low open rates – and that you want to increase open rates by 10% – you could: 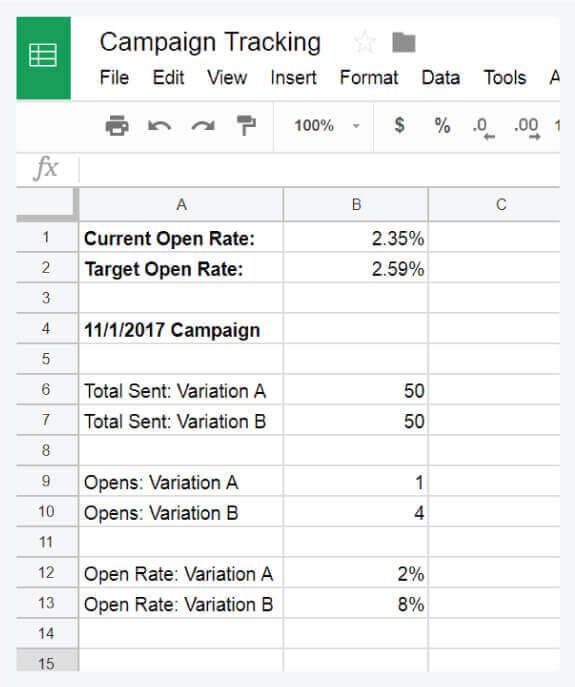 Use your email provider’s built-in A/B testing technology, or record your results in a simple spreadsheet.

In the case above, variation B met the threshold for increasing open rates by at least 10% (as 8% is higher than the target 2.59%). Variation A did not.

This kind of test can’t be considered conclusive. It’s not statistically significant, so you can’t be sure the results you’re seeing aren’t due to random chance.

But it does give you one data point to add to your campaigns to inform future tests. Run enough experiments like these, and general patterns will emerge that show you the best cold email approach for your audience.

One opportunity to expand on the data you collect is to actually call up prospects who don’t respond to your cold email. Steli Efti uses this process and describes it this way:

“Take a sample of the emails you send, and follow up with a phone call. Your objective in the call isn’t to make a sale, though it could lead to that. Instead, you want to find out what worked in your emails and what didn’t. You’re gathering intel.”

In his close.io blog post on the subject, he goes on to explain:

“When you start with a sample of 50 emails a day, it’s an opportunity to drill into the qualitative side and find out what connects to people on an emotional level. By making the call, you can gain valuable insights to your sales strategy and business that are unavailable to even the largest of data sets.”

If you aren’t sure why you’re getting the cold email A/B test results you’re seeing, this can be an especially valuable approach.

Step #5: Set Your Next Test 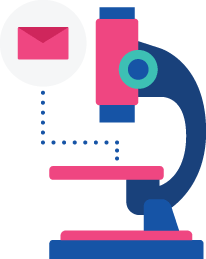 Once your test has concluded, start the next one up.

In any case, keep this rule in mind: always be testing. Always be working towards a goal. It’s only through this kind of consistent commitment to optimization that you’ll get the best possible results out of your cold email campaigns.