ThinkAlike Inc. is an LA-based consultancy that helps ambitious B2B brands sell their product. Working predominantly with small companies that create tech solutions for the media and entertainment industries, the ThinkAlike team is absolutely amazing at cold email outreach.

Generating leads and booking product demos is their bread and butter. And Mailshake plays a huge part in what they do.

Throughout the years, the ThinkAlike team has developed a watertight lead gen process based around sourcing potential prospects via LinkedIn Sales Navigator, then targeting them with super-personalized email campaigns delivered through Mailshake.

Personalization is absolutely key to their success. We’re not just talking about superficial personalization, like sending the same message to 1,000 people but including their first names in the subject line.

We’re talking about hyper-targeted campaigns aimed at highly specific lists of just 10-15 people per day. At that level, it’s possible to personalize to such an extent that it’s almost like they’re speaking to a single individual.

With such a granular focus, you’d imagine ThinkAlike would be chasing after the big-hitters in the C-suite. But that’s not the case.

Instead, they seek out a very specific type of person within their target companies: someone who would be using the product on a day-to-day basis, would clearly understand the benefits it offers, and has the influence to make a recommendation and move it up the totem pole to consideration.

Having made contact with a prospect, it typically takes about three touches to strike up a conversation. ThinkAlike’s metrics show that clicks and replies start to spike once the third message has been sent, explains the company’s Founder & President Zack Gutin: “I believe it’s people thinking ‘let’s see what this guy’s trying to get our attention about and that’s where we’re seeing the activity.”

Without the right toolkit, running such laser-targeted campaigns would require a huge amount of legwork. It would be inefficient.

Fortunately, Mailshake makes it simple, says Zack: “One of the things I love about Mailshake is the ability to really personalize so that the emails come through with merge tags that don’t feel very spammy, and we can remove things like unsubscribe links because we’re targeting very small lists. The idea is it takes a long time to get those hyper-targeted lists together, but they pay off in the long term.”

Having made a commitment to hyper-personalization, it’s absolutely vital that the ThinkAlike team get their messaging right. 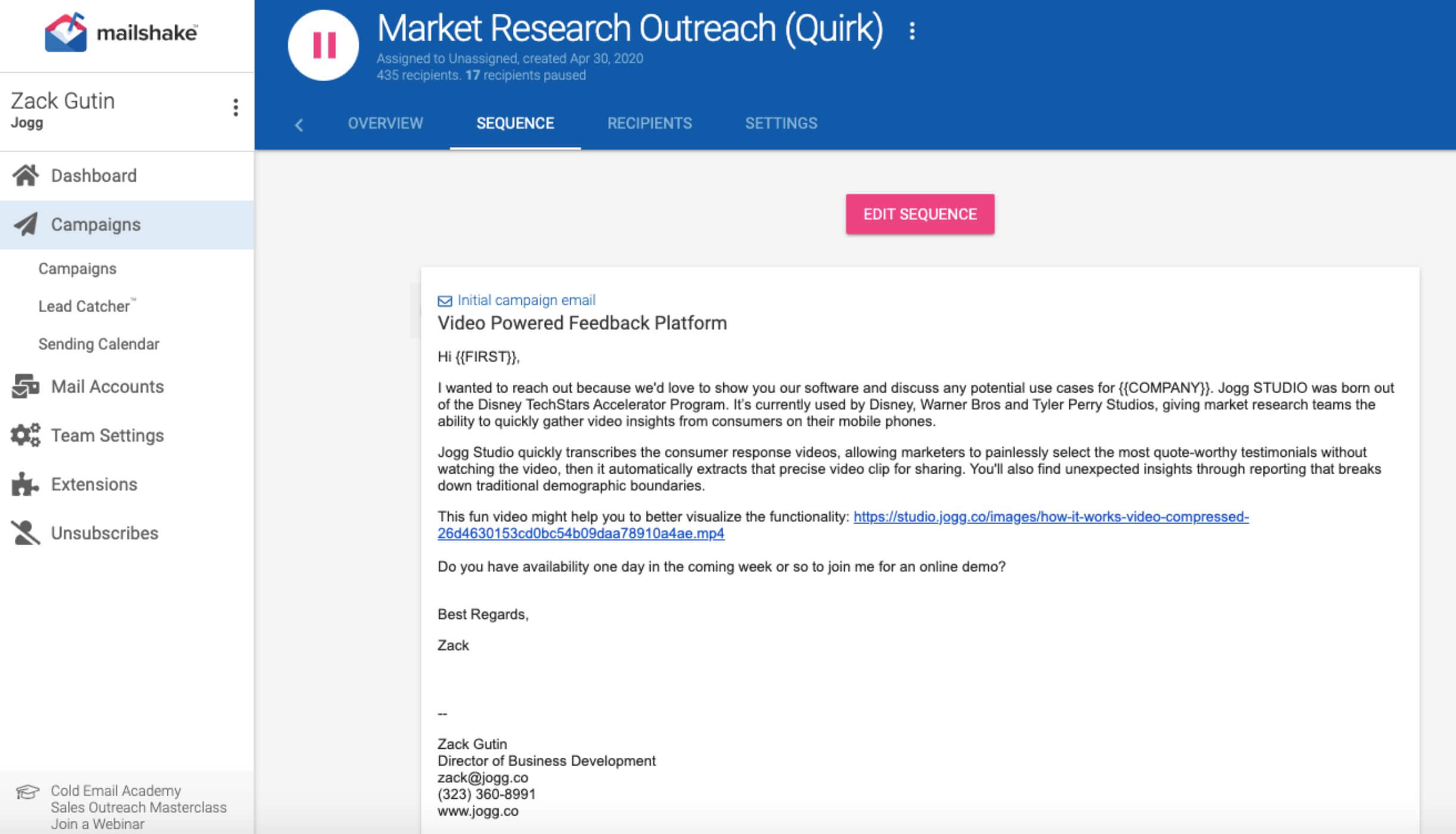 A conversational approach – speaking to prospects as peers, rather than as a faceless service provider – is the way to go. It’s like meeting someone at a networking event for the first time; you wouldn’t introduce yourself and start spewing USPs and statistics at them.

“You’d go over, explain who you are, explain a little bit about what you know about them and how that might overlap with what you’re doing, and why it might be of value to get to know each other a little better,” says Zack.

“I find that really goes a long way and ultimately it works really nicely with Mailshake because we can take that first message to be really friendly and casual, and in the followup sequences we can start to add more and more information about what the product is and the features and so forth, knowing that that’s all going to be automated anyway.” 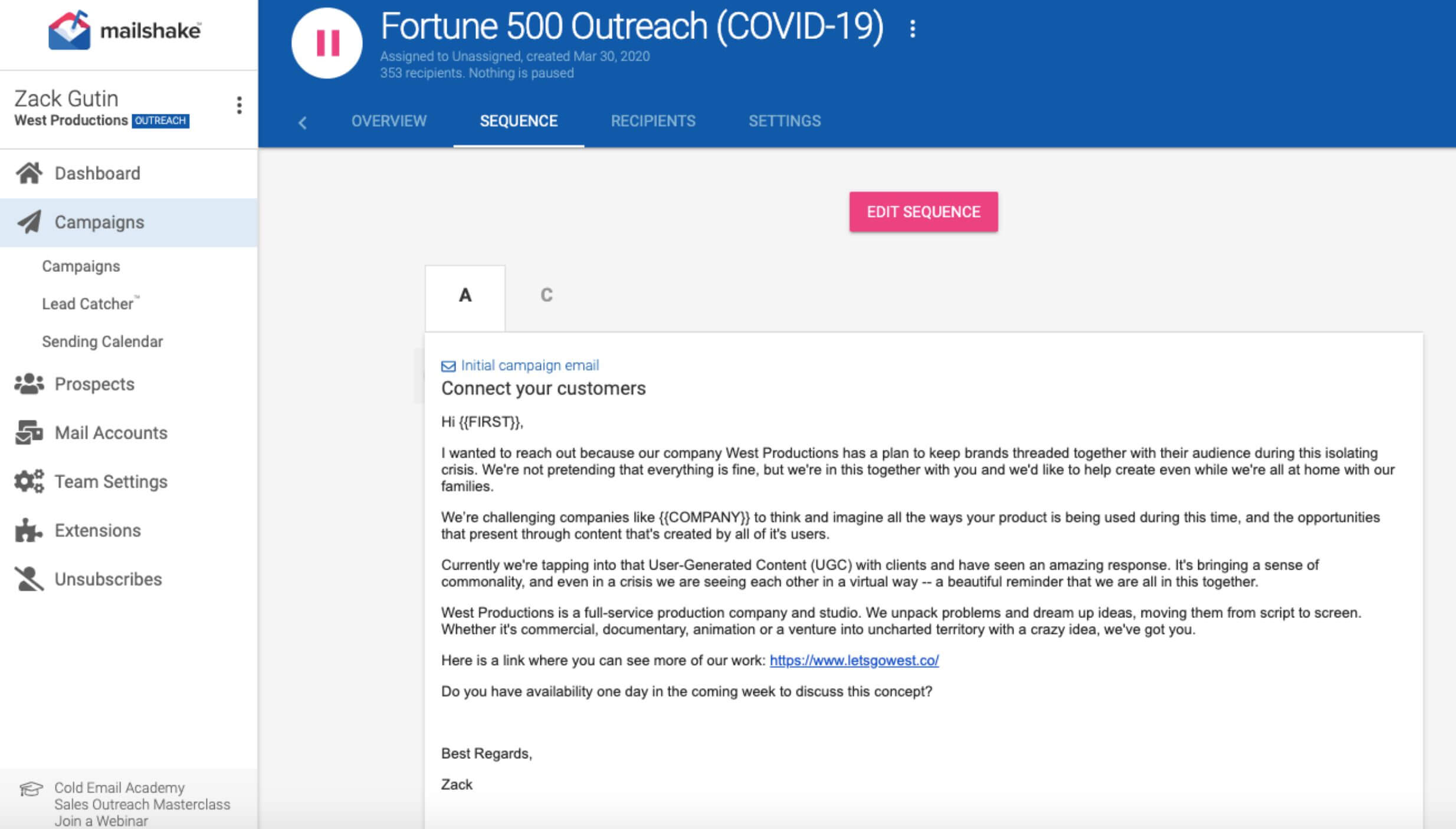 ThinkAlike focuses solely on cold email outreach. That didn’t happen by accident – it was a conscious decision, based on the fact that email makes it far easier for prospects to share information verbatim with their colleagues.

“The ability to share the information and push it around internally with an email versus some sort of rehashed version of a phone call where they’re not getting all the details correct, I think that’s really valuable,” says Zack.

The ThinkAlike team prefers that their clients don’t engage in cold-calling alongside their email outreach, as Zack believes that this risks damaging the relationships he’s worked so hard to build and nurture: “My fear is that whoever it is they’re hiring to follow up the leads I’m creating is going to take a different tone. That they’re going to be too aggressive and step on the toes of what I’m doing.”

However, he believes reaching those same prospects via social retargeting campaigns can be effective: “Some of my clients will do retargeting campaigns, where through Facebook or others they’re taking the email address and are setting up campaigns so that they’ll see advertisements later in the day, even after work, in their social feeds. That I don’t mind as much, that’s soft-touch.” 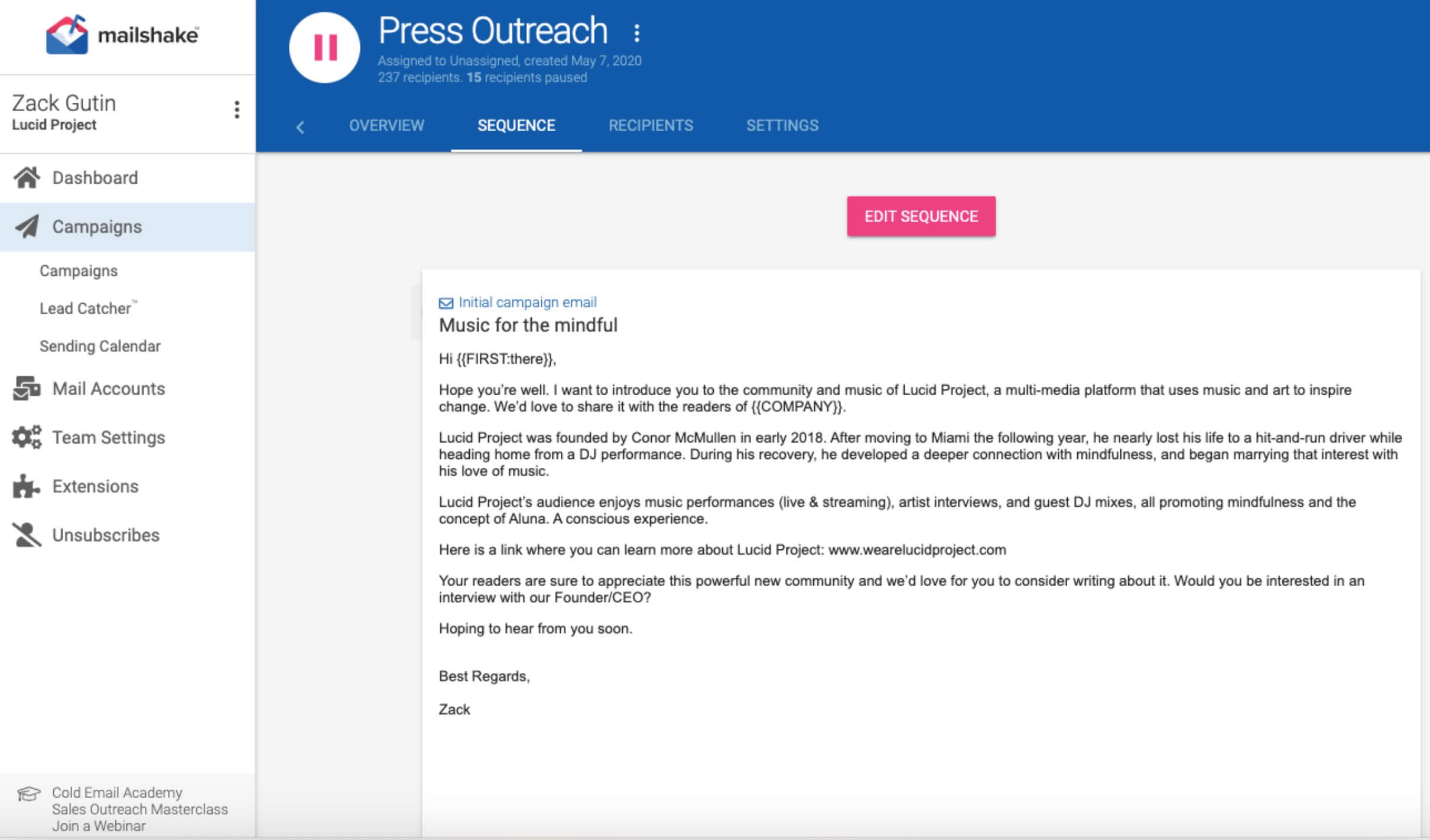 Over time, the ThinkAlike team has developed a 90-day sales cycle that enables them to deliver real, measurable value to their clients via cold email outreach. Clients are given the following roadmap for how a campaign will work:

While deal sizes vary significantly from one client to another, ThinkAlike is routinely helping its partners win five-figure deals, with exceptions that are six figures. For the ThinkAlike team and their clients, Mailshake has been a real game-changer.

Like the sound of Mailshake? Think we could help with your own lead generation activity? Book your 30-minute demo to learn how we can empower you to reach new prospects and close more deals!