Marketing a SaaS product is pretty darn difficult. More so with the competition looming in your backyard. As a Co-founder, I understand these challenges pretty well and over the years have understood the fact that ‘you won’t get if you don’t give!’

Needless to say, when it was time for us to showcase our second product offering to the world, we decided to follow the path mentioned above. We decided to share an insightful Ebook with the community as a precursor to our launch.

The Ebook dissects some common yet unanswered questions about Net Promoter Score- a miracle metric that has been helping businesses grow since its launch a decade back.

But that’s not all.

We wanted to share the exact approach used by companies who use NPS as a part of their growth strategy, in order to make this information insightful for the readers. We’ve often seen Ebooks that are filled with blocks and blocks of content, however, lack actionable advice that can be put to use instantly. We wanted to break this approach.

This strategy involved sending cold emails to hundreds of marketers, product guys, customer service and support teams in order to get NPS insights that were real and relevant.

This was a real challenge (sending COLD EMAILS that is). If you’ve ever been in my shoes, you’ll know that cold emailing does not work in most scenarios.

However, in the end, we reached out to 130 companies and were able to catch up with 47 brilliant companies such at Hubspot, Buffer, Typeform, Zapier, and others. As a result, we were able to generate 500 leads in just 72 hours and are still going strong! For something that took us almost 45 days to turn around, this is a massive feat!

All this wouldn’t have been possible without Mailshake!

In this article, I’ll share the exact process we used to generate these humongous leads (still counting if I may add) using this amazing outreach tool. I’ve also discussed our promotion strategy, which can help you in making sure that your Ebook or any other form of content for that matter reaches more and more people.

So let’s get started

#1 Identify the tool and strategy

Before we even began writing this Ebook, we wanted to settle for the outreach tool that we would be using. We understood the repercussions that come via cold emailing (here’s an example) 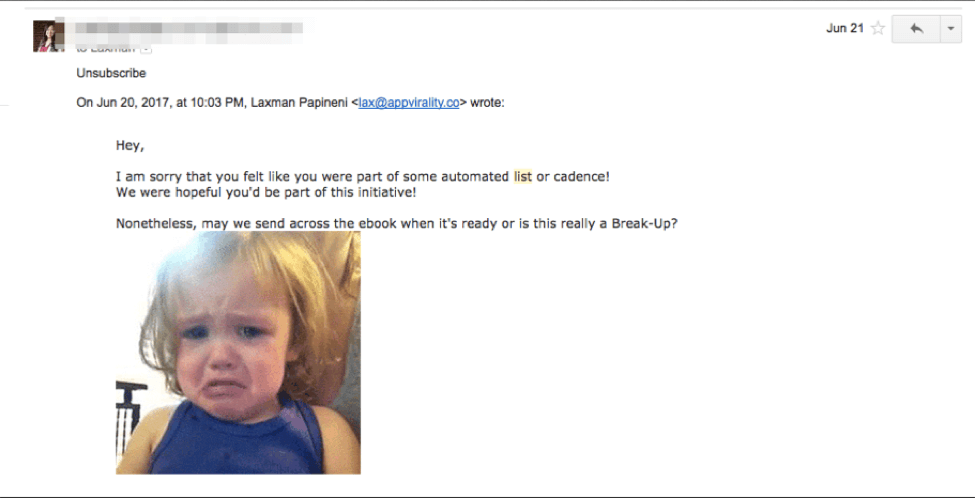 Although our intention was noble and our strategy personalized, we still felt that a ‘one-on-one’ emailing would be arduous and time consuming and would impact the Ebook timeline. The NPS strategy implemented by the companies was the shining point of the Ebook and without it the content won’t convert. So we were in a fix.

We, therefore, scouted for tools of all types, until we chanced upon Mailshake. Mailshake promised us everything that we wanted in an email outreach tool. It offered us a seamless sync with our G-Suite account, helped us upload the CSV data files and create a drip campaign sequence in a matter of minutes.

Here’s a quick video by the team at Mailshake for those who want to get started with this tool.

Having uploaded the CSV files, we jumped on to create our templates. We chose to use our own templates, but Mailshake has a handful of ready-made templates to get you started.

#2 Put the tool to maximum use

Often I have interacted with teams that are too eager to invest in tools that automate some part of their marketing efforts. It could be a scheduling tool, a checklist generation tool or an email automation tool. The problem is that they are clueless when it comes to extracting maximum value from it and they end up regretting that decision.

That’s the mistake we wanted to avoid. So when we decided to hop on the Mailshake bandwagon, we were clear that we would use the tool in totality and not just a ‘part’ of it.

Given the timeline, we kept our workflow pretty simple with a two email sequence. The first email was straightforward and asked the recipients if they would want to be a part of an Ebook.

We used a simple headline hack (name of the person + name of the company) and used an intriguing copy to pique their interest so that they do not dismiss us as ‘just another spam email.’ We also quoted names of the companies that had already agreed to be a part of it to build up the excitement.

Here’s a look at the first touch 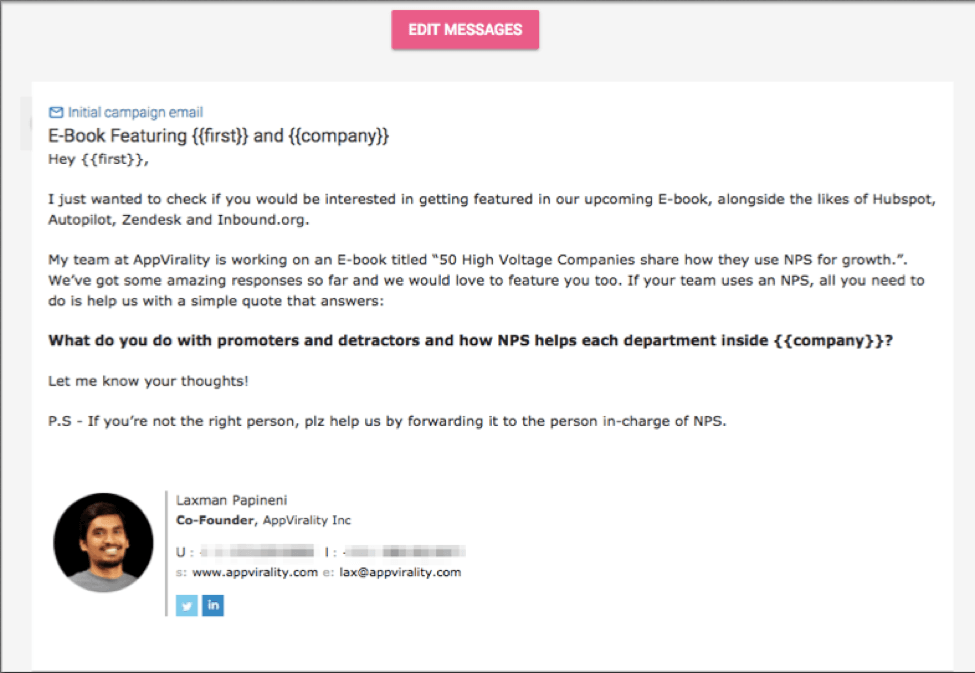 Our initial email (first touch) had an 80% open rate, which affirmed that our copy was a hit.

What also helped us was the fact that we sent these emails to multiple people within a company (that affected our reply rate, but that’s expected). This approach meant that our request reached the right person at all cost. Another useful thing that Mailshake allows its users is the ability to edit the copy in the ‘edit message’ section. So if you feel that your copy isn’t a hit with users, you can change it anytime.

All that we needed was to upload more contacts and follow up with them in a systematic manner.

That’s where the ‘Reply’ feature came in handy. This feature helped us simplify our reminder or second touch emails. Here’s a look at our second touch. 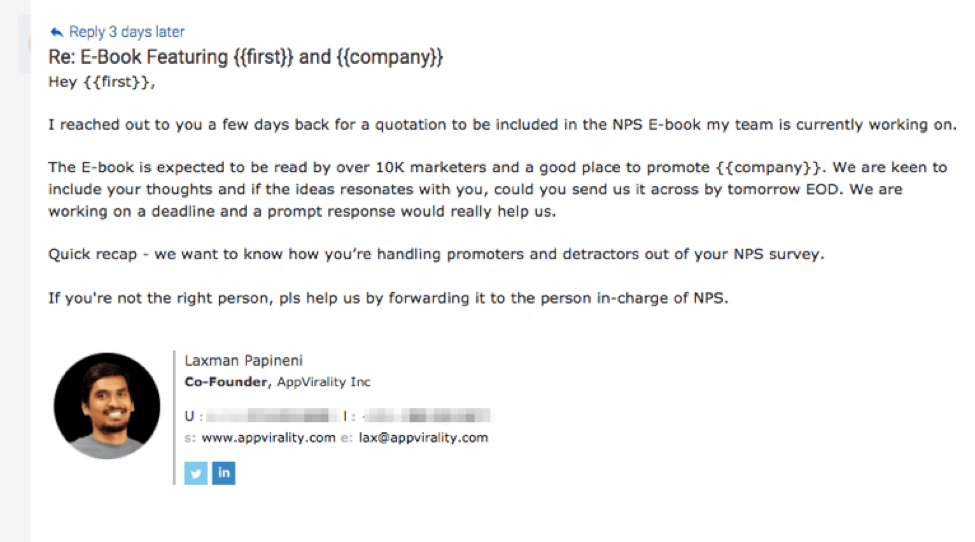 It helped us set up a cadence, which we set up 3 days after the initial email was sent. This features can be put to use in different ways. For example, you can choose a preferred time, action or the number of days after which you want to send the next email.

For busy teams, a feature as simple as this can save up many useful hours. Another feature that came in handy while running this campaign was their ‘Lead Catcher’ feature.

This feature allows us to ‘define’ what a lead meant for us. Since we were short on time, first opens mattered a great deal for us. Of course, a lead may mean different things for different people (click on a link, an email opened twice, etc.) and the same is fully customizable within Mailshake. 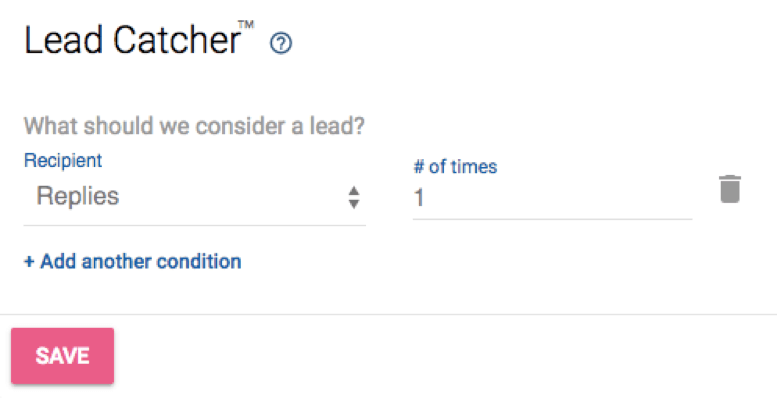 Using Lead Catcher allowed me to keep my inbox clean, and helped me focus on conversations that really mattered. For example, if a person stated their inability to participate like the one below, I could move the conversation out of the campaign.

Lead Catcher also allows conversations to be assigned to other team members if required.

Since we were dealing with bulk data, I wanted to space out the emails as much as possible. On a regular day this could be a tough task to achieve, but with Mailshake it was easy-peasy.

The ‘Sending-Calendar’ feature allowed me to set up a systematic schedule with my emails. It made it easy for me to define the number of emails that need to be sent each day and at what intervals. This feature also helped me set up a maximum sent number. One can also block out the days they do not wish to run the campaign which not only helps in keeping a clean account, but also prevents Gmail from blocking the email id for spamming due to bulk emailing.

Here’s a quick look at our schedule

In the end, we sent out a total of 336 emails, with a 77% click through rate, which eventually materialized in 40+ unique replies!

The second step post a magnificent start was to gather all the learnings, sift through it and create a memorable Ebook, which was promptly and efficiently executed by our in-house content team.

Once the Ebook was live, the next big challenge for us was to was to start promoting it. Often it is believed that an influencer inclusive content is easy to promote. Marketers feel that they need to just send an email to the influencer stating that they’ve been mentioned in the Ebook (or blog etc.) and they will re-tweet or share it instantly!  Unfortunately, that’s not true. Influencers are a busy lot, and they may CHOOSE to help you with your promotion.

Having led various influencer-led promotions in the past, we were clear that we need to promote this Ebook in a way that’s helpful to our readers and prospects. That’s why we clearly identified the channels where the content was to be gated and where we needed it to be free.

Also, instead of promoting the content as a generic link, we decided to share it in the form of discussions. This strategy helped us gain massive upvotes on platforms such as Inbound and Growth Hackers, and we trended on both these platforms for 3 consecutive days!

We also used other platforms and forums such as Facebook to share the details with our existing users. Since the product is created under the AppVirality umbrella, we shared it via both our FB pages. Another strategy was to offer ungated Ebook to highly engaged communities on Facebook such as SaaS Growth hacks and BAMF. This further boosted the interest in our Ebook and we were able to get more upvotes and traction on our threads.

We also used this Ebook as a lead magnet while running our FB ads.

This helped us consistently attract new interest in our Ebook.

We also explored other avenues such as Linkedin and LinkedIn groups to gain more engagement. We also posted the content on websites such as Indiehackers and used Zest.io to help scale promotion. We also reached out to our industry friends in helping us share this ebook.

The response to our Ebook is still warm, and we are getting new leads and interest in our product each day. To gain the most from it, we’ve also been experimenting and pushing new tactics each day.

Attracting new leads through content is something that every SaaS business wants to master today. Some strategies work and some do not. However, what’s important is to constantly experiment with ideas and tools and see which helped you gain the most.

For us, a combination of influencer led content and an effective outreach tool was the winning combo. While one is something that can be controlled internally, Mailshake-our chosen outreach tool helped us immensely. The benefit of using Mailshake was the personalization that we could weave in our copies and how it set a pace for long-term relationships with the wonderful companies and people who helped us reach our goal.

I would love to know your thoughts about our experiences in the comments below. If you are interested in downloading a copy of our Ebook, you can do so here.

Laxman Papineni is a serial entrepreneur and presently the co-founder of AppVirality and GrowthScore.