Estimates suggest that turnover in U.S. salespeople is as high as 27%, which is significantly above the U.S. average.

This is a problem, because each employee you lose affects your bottom line in a variety of ways, from the productivity you miss out on while searching for a replacement, to the time it takes for a new hire to get up to speed.

Furthermore, bear in mind that organizations spend an average of $2,326 a year per salesperson on training activities. So if a sales rep sticks with you for three years then leaves, you’ve lost out on close to $7,000 in training investment alone.

And that’s only scratching the surface. The true costs of losing a salesperson are much higher.

What’s the Difference Between Attrition & Turnover?

Before we dig into why employee attrition is such a concern in the world of sales, it’s worth clarifying exactly what we’re speaking about, because attrition and turnover aren’t the same thing:

Attrition refers to the natural loss of employees through processes such as retirement, resignation, or redundancy. In these instances, the employer will fill their position.

Turnover is the voluntary or involuntary loss of employees from positions that the organization intends to refill. Voluntary turnover can happen when an employee chooses to quit, typically because they have secured a new job with better pay or development prospects. Involuntary turnover occurs when an employee is terminated due to factors such as poor performance or behavioral issues.

What is the Boomerang Effect?

Often, sales organizations will dismiss the impact of high turnover and employee attrition in sales by pointing to a handful of instances in which employees have left, then returned months (or even years) down the line.

Those employees secured a new role, but soon found things were no better — or were actually worse — than in their previous position, so they headed back in the opposite direction. That’s what we call the “boomerang effect.”

When this happens, some sales managers view it as an unmitigated success; a confirmation that they’re doing the “right thing”. But more often than not, the employee only returns to the original role because their new organization was even worse than the one they left. It’s a classic case of “better the devil you know.”

In reality, the boomerang effect is nothing but bad news. It’s a clear example of employee turnover that you can avoid. And as we’ll go on to discuss, turnover is expensive, which means you definitely want to steer clear of it when possible.

What is the True Cost of a “Boomerang” to Sales Organizations?

There is lots of research aimed at quantifying the cost of employee attrition in sales and turnover. According to Gallup, a 100-person organization that pays an average salary of $50,000 could be faced with turnover and replacement costs of anywhere from $660,000 to $2.6 million per year.

However, few if any studies have specifically examined the costs of boomeranging employees. It’s easy to assume that once an employee leaves, hates their new job, and comes back, the whole problem is solved and any associated costs can effectively be written off or forgotten about.

But that’s just not the case. At RepVue, we’ve crunched the numbers to understand the true costs of the boomerang effect.

To keep things simple, we’ve assumed that on the first day after returning to their original employer, the sales rep in question immediately gets up to speed and starts performing just as productively as before they left. In reality, that’s never the case — even though they understand the product and industry, they have little or no pipeline to work with.

Our figures show that over the course of a year, a boomeranging employee costs a sales organization more than $2 million. Here’s the breakdown, followed by an explanation of where those figures come from: 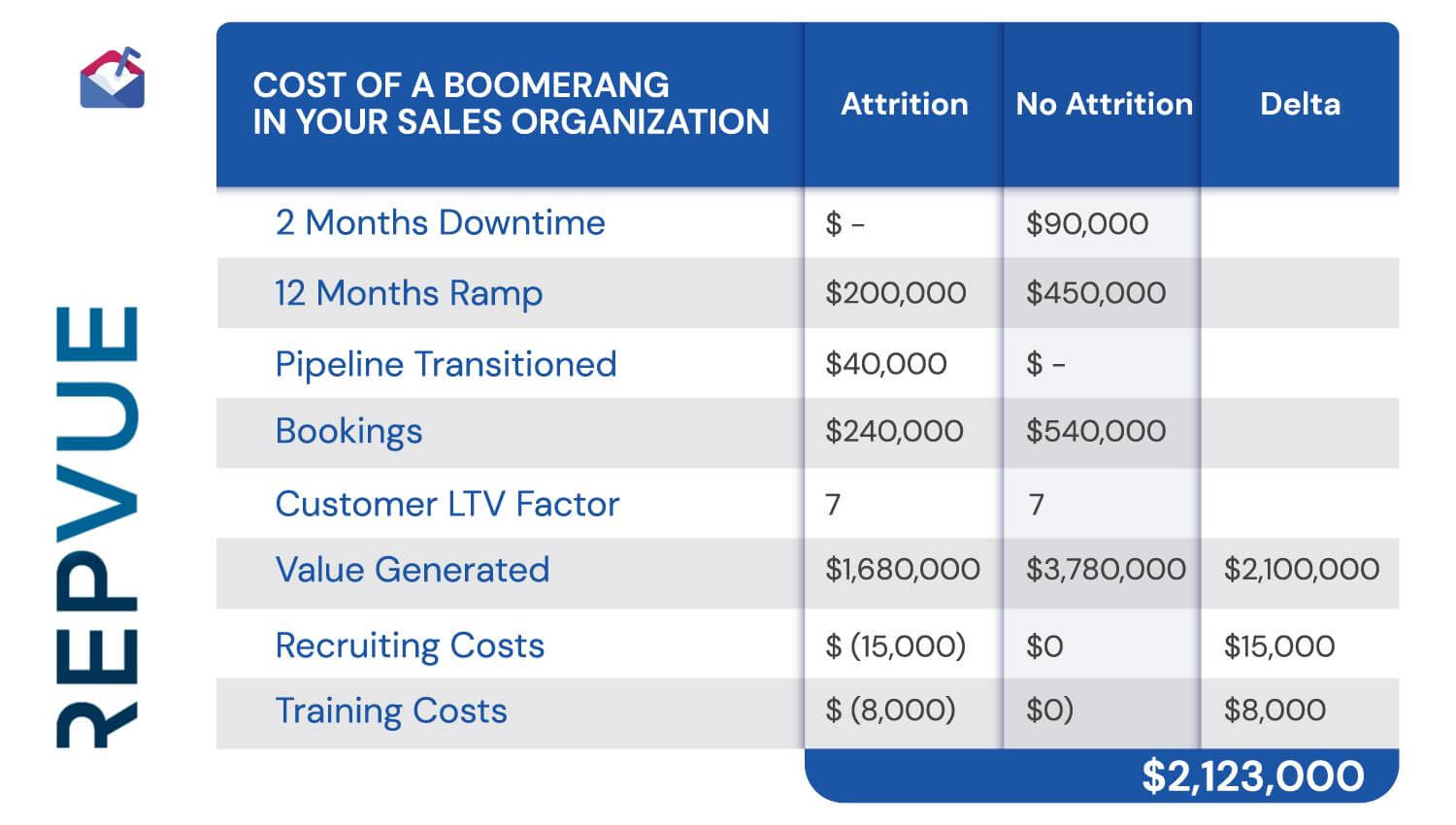 This scenario is based upon a software salesperson with an annual quote of $650,000 who typically generates an annual recurring revenue (ARR) of $540,000. The salesperson isn’t a top-tier performer, but they’re not necessarily someone you’d want to lose. Now, let’s deep-dive into the numbers:

So there we have it — a boomeranging employee ends up costing $2.1 million when compared against a scenario in which no attrition or turnover occurs.

The only small upside of the boomerang effect is that the returning employee should have a shorter ramp period, given their familiarity with your product, industry, and customers. That’s definitely not a big enough benefit to allow you to ignore all the negatives.

Ryan Walsh is the founder and CEO of RepVue, the world's largest crowdsourced sales organization ratings platform where sales professionals can discover, research, and apply for sales roles at the best run sales organizations on the planet. Prior to RepVue, Ryan was the CRO of ChannelAdvisor, where under his leadership he grew revenue from $35 million to $115 million, helping realize a successful IPO during that tenure.