A Challenge, A Failure, and a Monster Success Story: Nathan Barry

Allow me to challenge you.

Starting today, I want you to build a web application that generates $5000 of monthly recurring revenue (MRR) within six months. Think you can do that?

I’m not going to sugarcoat it: it won’t be easy, it’s not a get-rich-quick scheme, and it’s not something everyone can do. But before you dismiss the whole thing as a pipe dream, let me introduce you to someone.

But he’s also someone who gave himself the challenge described above a few years back. The result? ConvertKit. Maybe you’ve heard of it, maybe you haven’t, but his “little” project has evolved into a thriving business with 30 employees across 22 cities and over $10 million in annual recurring revenue (ARR).

It’s an email marketing platform designed for professional bloggers and podcasters. The tagline describes it as “The power of Infusionsoft, but easier to use than MailChimp,” and with clients that include Pat Flynn of Smart Passive Income and Copy Hackers, it’s definitely struck a chord with that crowd.

But let’s slow it down. I recently spoke to Nathan about how he went from nothing – no idea, no clients, no service – to millions in ARR in just four short years.

In December of 2012, Nathan was fresh off two very successful books that netted him over $80,000 in about 3 months. That said, he was acutely aware of the fact that each book he sold through promotion and lead nurturing was a one-time sale. People bought the book, and went on with their lives.

If he stopped hustling and driving traffic, the sales would dry up.

So, he decided to focus his next project on recurring revenue in the software-as-a-service (SaaS) industry, something he describes as the best model to do that.

The Web App Challenge was born. He had to come up with an idea, create the software, and find people willing to pay for it. And he had to hit $5000 in MRR within 6 months.

Simple? Heck no. Not one to make it easy for himself, though, Nathan placed even further restrictions on the task: he could only invest up to $5000 of his own money, and he could spend no more than 20 hours per week on it.

The deadline was set for July 1, 2013. Challenge accepted.

A Couple of Observations

Before we look closer at what and how he pulled it off, I want to highlight a few things about the challenge itself that set Nathan up for success right from the get-go:

“No matter how good a plan is, or how sincere our intentions, humans are horrible at self-discipline. Instructions and info aren’t enough—you need incentives and consequences.” ~Tim Ferriss, Author, Speaker, Podcast Host, and Innovator

The Idea and the Target

Starting with nothing, Nathan turned to the concept of idea extraction. Rather than brainstorming a list of products and then trying to find a target group for it, idea extraction works in reverse: talk to people in a particular field or industry about their pain points, zero in on a common thread, and create a solution for it.

He started by looking at micro-niches – which makes the idea extraction phase that much easier – and eventually settled on professional bloggers. It’s a big enough umbrella to be profitable – with countless micro-niches within it – and as a blogger himself, Nathan already had insight into the problems and pain points.

“I got tired of hacking around my email provider to implement the tactics I know would grow my blog and increase revenue.” ~Nathan Barry

His SaaS product, therefore, would be an email marketing solution aimed specifically at professional bloggers.

To get them, Nathan followed the old adage “less is more.” By focusing on an ultra-specific micro-niche (professional [blank] bloggers), he was able to create both a finite list of targets that fit the criteria and (eventually) an echo chamber within the niche itself as use of his service spread.

“The micro-niche approach is more personalized and less spray and pray. It’s more narrowed in and the CTAs tend to be better.” ~Nathan Barry

Nathan’s list-building method as a start-up was simplicity itself:

It was manual and methodical.

Once he had a long enough list, he began to qualify each one by asking: are they “internet famous” enough to be featured or interviewed by others? If yes, they probably had an email list of 5000+, making them a worthwhile lead.

Those that fell short were saved to another spreadsheet for possible exploration down the road.

In essence, he’d come across a blog by either searching or browsing, check what platform they’re were using, and reach out to them with a straightforward email template: 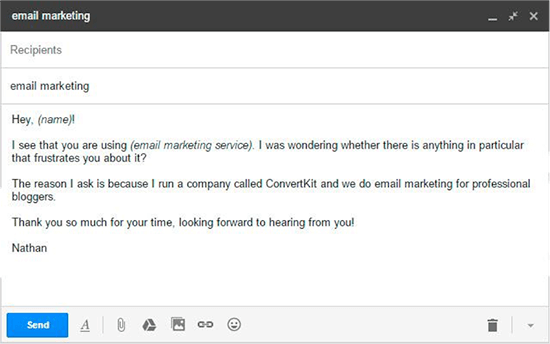 As he gained momentum, Nathan was able to add a bit about others in the same industry already using his service (“We’ve got a lot of great bloggers using us like Katie and Seth from Wellness Mama, Pat Flynn from Smart Passive Income, and Chris Guillebeau.”) to provide some always-welcome social proof.

By asking about frustrations with their current platform, Nathan not only gave them something quick and easy to respond with, but he also got to collect valuable data about pain points and desired features they wanted from a new platform. Gold.

As the July 1, 2013, deadline arrived, ConvertKit was bringing in an MRR value of, drum roll, please…

$2480. Nathan Barry had failed on the one metric that mattered – monthly recurring revenue. His target was $5000, and he managed less than half of that. Still impressive – who wouldn’t want an extra $2500 each month? – but not what he set out to accomplish.

That could have been the end of the story. Challenge over. Challenge “failed.”

His enthusiasm waning, Nathan held on to ConvertKit for a few more months. By October 2014, the MRR had fallen to $1000 and he was seriously thinking about pulling the plug.

It was a conversation with a friend that convinced him to switch gears and devote himself full-time to the project.

More searches. More outreach. But to truly turn things around, he knew he’d have to expand his process and technique.

For new leads and prospects, he’d follow and interact with them on Twitter and LinkedIn. He’d find out everything he could about them.

“If I’m trying to land you as a customer, gradually over time you’re going to see me everywhere.” ~Nathan Barry

By the time he sent his email to them, he was a recognized name in their inbox. This engagement technique generated response rates that were 35% higher than if he’d had no contact with them.

Next, Nathan set his sights on some very big fish. For bloggers with 50,000+ subscribers, he’d follow the same pattern, but he’d eventually send a quick note with a friendly offer:

“Hey, I’m in [blank] next week, and I’d love to buy you dinner/meet up/talk to you/get to know you better.”

He’d schedule a few of these in-person meetups for a given location, hop on a plane, and deliver the kind of personal touch we don’t see much anymore. Nathan met them, connected with them, and asked about their email marketing. Face to face. In real life.

It’s the long-lost art of real-life relationships (remember those?) and an old-school sales practice, but one Nathan believes should be brought back.

Why? Because it differentiates you from everyone else. It makes it all about the customer. And it works.

Nathan Barry had momentum. He had a growing customer base. And his brand was making waves.

The bigger he got, though, the more his whole workflow had to evolve and adapt.

“I made it work through pure hustle, but now other people in the company are actually being smart about it.” ~Nathan Barry

As the company expanded, how they went about getting and keeping customers changed a little, too.

They now use an actual CRM instead of a spreadsheet. They now get a decent amount of customers through inbound methods like demo requests and scheduled calls, in addition to the outbound method that still brings them in today.

But most importantly, they discovered a way to erase the biggest, most common friction point: switching email providers with a big subscriber list is just too much work. 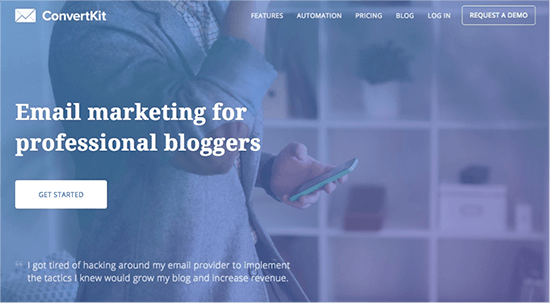 Nathan knew that his product was high-quality and that targets immediately recognized the benefit to them.

But those with a big email list were often reluctant to pull the trigger because of the time and effort involved in switching.

Many platforms offer how-tos, walkthroughs, and tutorials on migration. But no one cares.

“Do it for them. It removes the last major objection. It’s like they hang all of their objections on that one thing, and when you take it away, they go ‘Oh, okay, let’s do it’. I feel like many people in direct sales are missing that part of it.” ~Nathan Barry

The Concierge Migration service does the entire switch and setup for them, and all for free provided they bring a 10,000+ list with them.

This solution is key according to Nathan. Offer some sort of concierge onboarding service that eliminates the biggest friction point(s), and you get better customers using the product correctly. You over-deliver. Your customers are happy, and they tell their friends and colleagues.

You may lose money upfront, but the churn rate on those migrated in is typically very low. For ConvertKit, their monthly churn rate for all customers is only 6%. For those in the migration program? It’s a paltry 0.25%.

And the referrals and positive word-of-mouth from the influencers in that service create an echo chamber and feed the lead machine.

It’s an investment, a long game. It takes a lot of work, but it can pull your momentum up a notch just when you need it most.

Just don’t show your hand too soon. Nathan recommends that you wait until that’s the “wall” they put up and lean on. That way, you can heroically take it away.

Otherwise, they may take your offer and then build a different wall.

Give it away too early, and you run the risk of devaluing it and sounding desperate.

Effortless, easy, and friction-free. That’s a key component of ConvertKit’s success. After migration, users receive a welcome package with some small tokens of appreciation, and the person who completed their migration does a 30-day and 50-day check-in for questions, issues, and things that were missed. All in the name of facilitating referrals and word-of-mouth in addition to keeping their customers happy and satisfied.

“I 100% recommend direct sales to other SaaS entrepreneurs.” ~Nathan Barry

And it started with a challenge. And a failure.