All of these emails and their corresponding subject lines represent something significant. Namely, someone who is trying to reach me.

But why are these people trying to reach me?

Well, in all of the above cases, the end goal is to sell me something.

Which is the same story for your cold emails (and probably why cold emailing is so darn difficult).

Unfortunately, even the best subject lines do little to actually turn email receivers into responders.

Hence why my inbox has nearly 6,000 unopened emails. 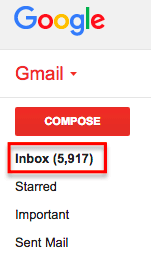 You might be better about opening emails than me. My wife, for instance, opens all of her emails so that she won’t have to go mad looking at a high number of notifications.

But I’ll tell you what she doesn’t do. She doesn’t read all of them.

This means that getting people to open your email isn’t enough. You want them to respond, not open and ignore. So you must build trust, interest, and credibility with the person you’re emailing. And quick.

But it’s also what brought you here.

So without further ado, here are seven out-of-the-box strategies you can use to warm up your cold emails.

1. Don’t Ask For Anything

And I have a suspicion that I’m not the only one.

Many of you have probably experienced this as well.

Someone sends you an email, asking to jump on a phone call or check out a demo.

And since you can’t directly see how that’s going to benefit you, the send-to-spam button becomes your best friend.

Many cold emails start by asking for something even though they’ve not yet given anything.

All relationships must start somewhere, and if you’re the person reaching out first, then you need to offer something of value before ever asking for anything in return.

Consider this email I received from Jon Morrow at Smart Blogger. 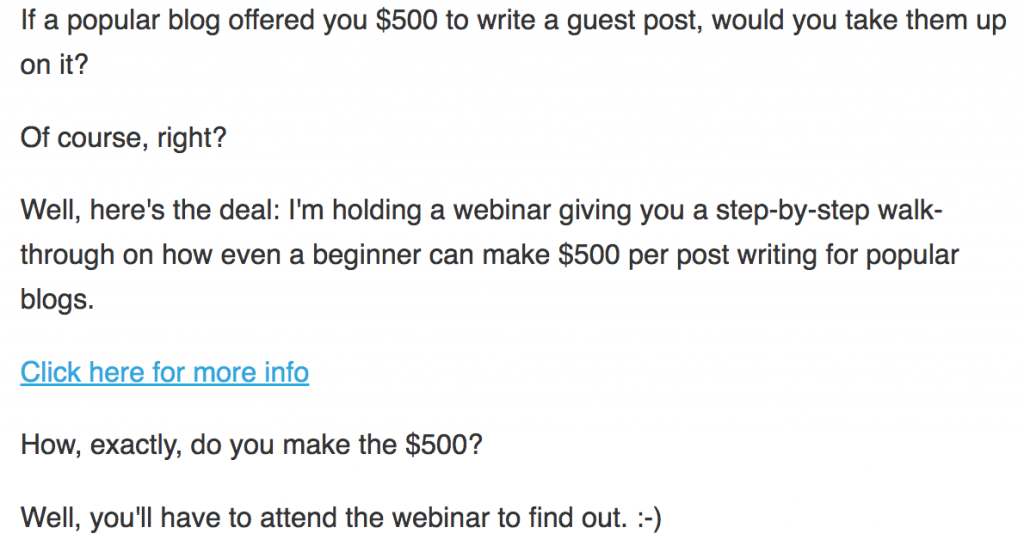 What is so genius about this email? Instead of simply asking me to attend the webinar, like many cold emails would do, he tells me exactly what I’m going to get out of it.

Sometimes getting a reply is just a matter of being a little more specific about what you have to offer.

Here’s another example from Jon Morrow. 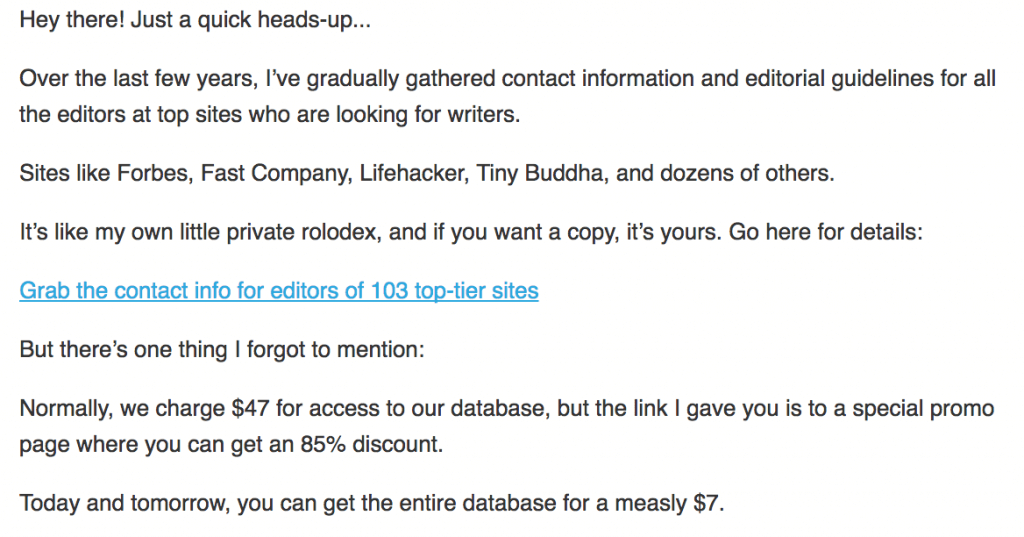 That’s a compelling offer for anyone who wants to write for top-tier sites.

But why is Jon Morrow offering something like that? Because he knows that if people start buying his products, it’s far easier to sell to them in the future.

And they’ll only start buying his products and services if he initiates the relationship with a remarkable offer.

He doesn’t ask for anything. He simply offers something that is going to benefit the receiver.

If your cold email doesn’t directly explain how it’s going to benefit the person receiving the email, then you have a much lower chance of making a sale or building a relationship.

Why should people listen to you?

There are two ways to answer that question in your email. You can either use a brief statement to build credibility about who you are and why you’re important, or you can lean on that credibility for the entirety of the email.

And here’s an example of an email from Trevor Mauch that leans on that credibility more heavily. 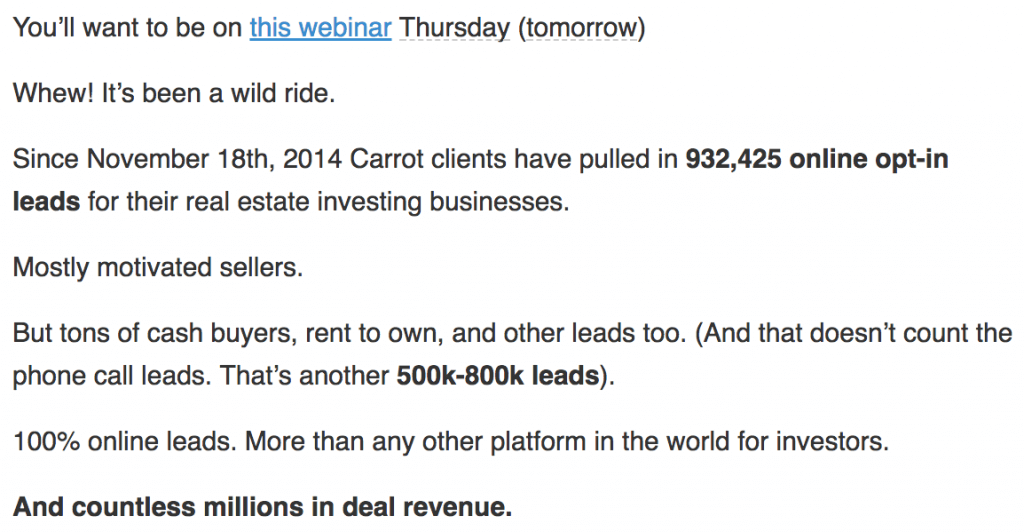 The reality is that people on the other end of a cold email have no reason to listen unless you give them a compelling reason to do so. If you have any sort of accomplishments that will add credibility to your email, then add it.

3. Use Your Best Pitch

When you walk into an interview for a new job with someone you’ve never met before, do you immediately ask them to do something for you?

Of course you don’t.

But an interview isn’t all that different from a cold email.

So why do salespeople do that with their cold emails?

In an interview, you put your best foot forward. And in a cold email, you need to start with your best offer. I’m not talking about an offer that will cost the receiver a lot of money, but something that is high in value and low in commitment.

Doing so will merit a higher response rate since people don’t feel like they have to commit to anything significant.

Here’s an example of this from a Black Friday sale by Scott Oldford. 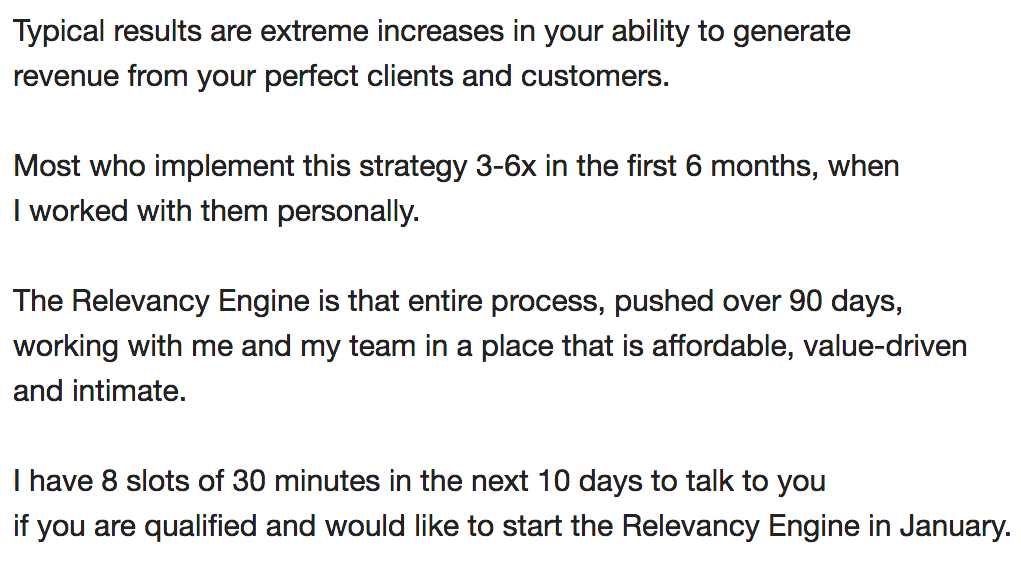 The last sentence of that email is where the value is. Scott Oldford, who’s built a multimillion-dollar company, says that he’s willing to talk to you for 30 minutes about your business.

Why is this different than most cold emails that offer to hop on a phone call?

Because Scott Oldford first establishes credibility, and only then does he make a low-commitment, high-value offer that the receiver can’t refuse.

Here’s another example of a pitch that HubSpot received. 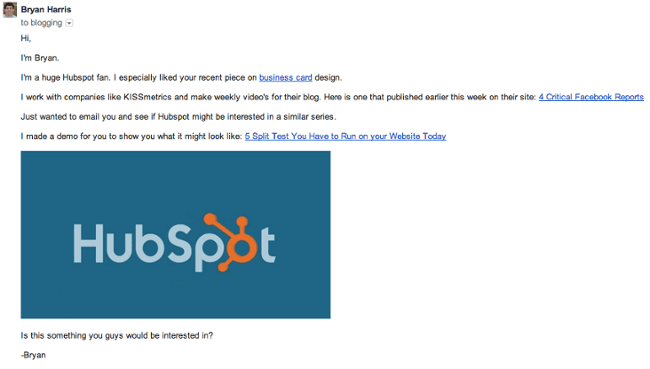 What’s remarkable about this email is that Bryan makes an offer that HubSpot can’t refuse. He made them an entire demo video free of charge.

How could anyone deny that?

If you offer something to your prospects that requires no or very little commitment on their part but that has incredible value for their business, they won’t be able to ignore you.

Give before you ask, and those relationships will return the favor in the future.

4. Mention A Reason For Your Offer

In other words, if your offer is truly exceptional, people are going to wonder why you’re offering it in the first place.

If you don’t offer an explanation, then you run the risk of prospects thinking that your offer isn’t as valuable as you claim it is.

Don’t overcomplicate it, though. Your explanation can simply be a brief caveat in your email.

In the email I mentioned earlier where Jon Morrow offers an 85% discount on one of his products, he gives this explanation. 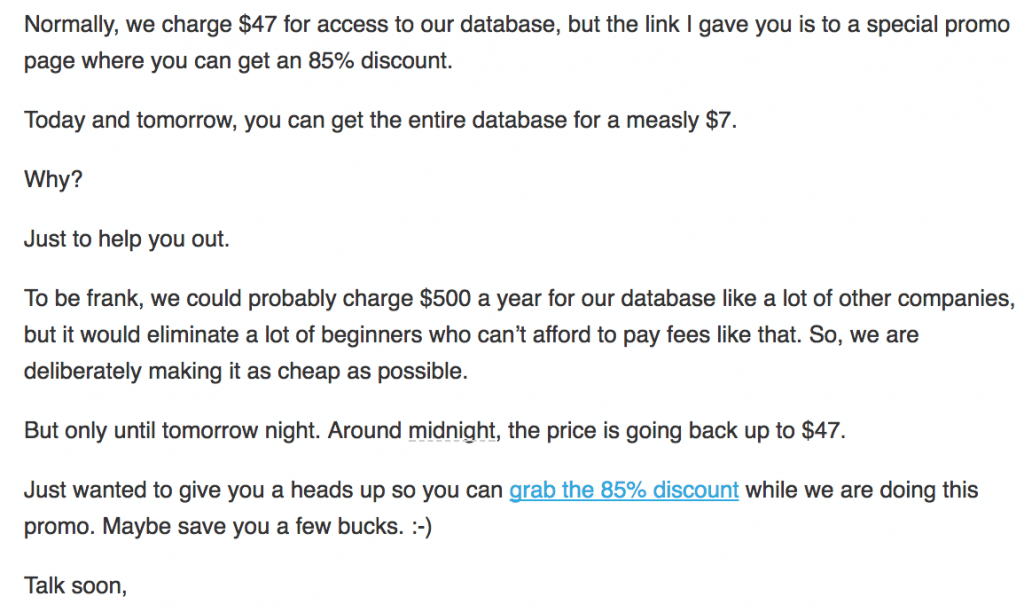 You can use this same tactic. Just explain that you are hoping to save the person some money. That will work wonders to legitimize your offer.

Scott Oldford does a similar thing in his email where he offers to meet with prospects for 30-minute chunks of time. 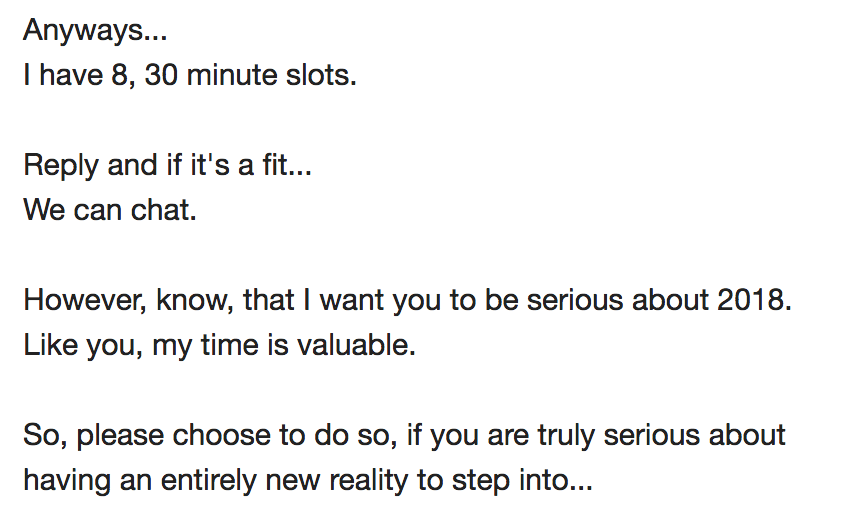 Lest someone think that the meeting isn’t valuable because he’s not charging for it, Scott explains that his time is valuable, so he only wants committed people to sign up.

He doesn’t directly offer a reason for what he’s proposing, but his email has much the same effect.

By explaining that his time is valuable and he only wants committed prospects, he shows that the offer is limited and he can only do it for the select few.

Giving a reason for the offer makes receivers of the email feel like it’s realistic.

Nothing can make your emails warm if you’re sending them to the wrong people.

Which is why it’s absolutely vital that you determine who your ideal audiences are and then send cold emails to those people.

There’s no point in wasting your time on people who aren’t interested in your offer anyway.

But here’s the thing. Most businesses don’t have only one ideal client avatar.

Now, whether the business acknowledges that or not is a different story. While many businesses have a variety of customer avatars, they might only officially recognize some of them.

But, for cold emailing, it’s important that you spend time determining who your audiences are and then segmenting your list accordingly.

One study revealed a 101% increase in clicks for segmented campaigns. 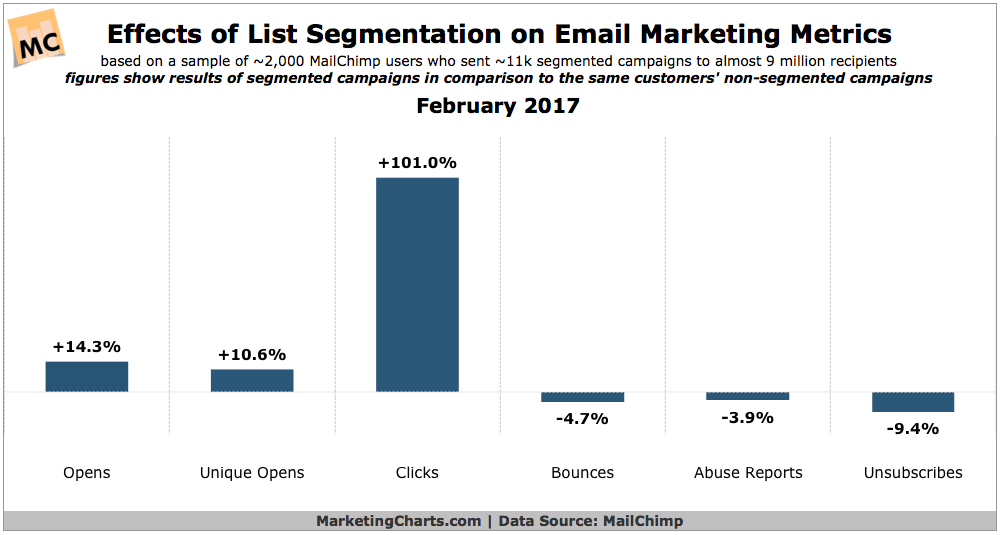 Luke Dully of Walker and Hunt states to build your customer avatars, you should, most notably, determine goals and pain points. 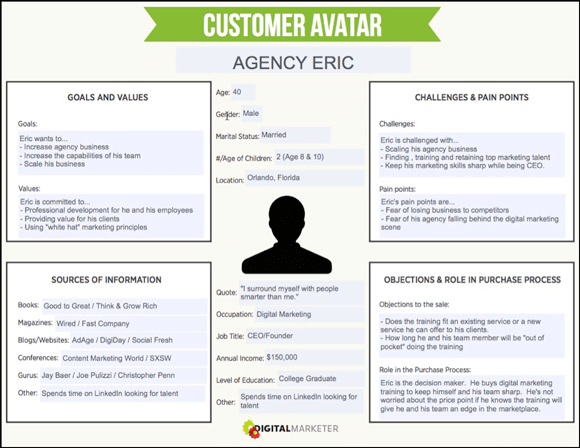 In other words, what are your ideal clients’ aspirations for the future? 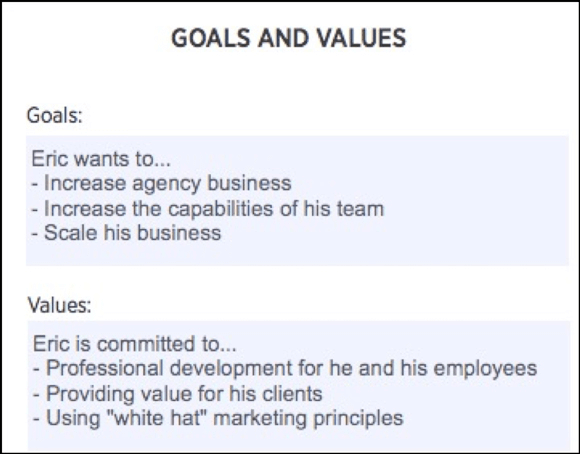 And what is the prospect’s main challenge in accomplishing those goals? 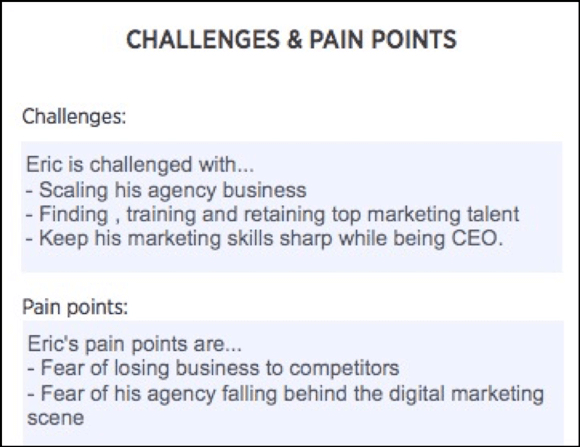 Most likely, you’ll have two or three different customer avatars that you need to pay attention to.

Segment your list to match those prospects and write emails with offers that appeal directly to their goals and pains. As email relevance increases, so too will your response rate.

6. Pitch To Plenty Of Prospects

So long as you’re sending emails to the right set of prospects and you’ve segmented your list correctly, increasing the size of your list is the logical next step.

As a rising tide lifts all boats, a bigger list means more potential for leads, traffic, and sales.

One thing’s for sure. If your list is tiny, your number of responses will be even tinier. To make the most of your optimized customer avatars and targeted list of prospects, add more people to your email campaigns.

The E-commerce store Barbell Denim, for instance, reached out to 100 journalists in hopes of gaining some publicity.

Out of those 100, only one responded.

Luckily for them, the one that responded was Fast Company. Which snowballed into features on other massive publications.

It also helped the Kickstarter campaign gain $735,000 for its launch.

But here’s the point: That wouldn’t have happened if they hadn’t sent 100 emails.

With every email you send, the chance that you’ll receive a valuable response, increases.

If you’re wondering what the average response rate is for cold emails, here’s what Fast Company experienced after they sent 1,000 emails.

Of course, the higher your response rate, the better.

What is practically guaranteed to help your cold emailing strategy is increasing your list size? Just make sure that the people you add are actually part of your ideal client base.

The last thing you want to do is unbox all of these brilliant cold emailing tips, start raking in leads, and then lose those leads because you don’t have enough time to follow up with them and keep up with your cold emailing strategy at the same time.

It’s no secret that cold emailing takes a massive amount of work.

Doing a good job makes the whole process even messier. Because then you also have to respond to leads, which gives you even less time to send more cold emails.

However you decide to do it, the reality is that you’re going to struggle to keep up with any leads that start rolling in if you don’t streamline your cold emailing process.

And keeping up with the leads you generate is sort of the point of emailing in the first place.

I’ll bet that you’ve spent a lot of time trying to craft great subject lines for your emails. And you’ve probably even done a good job of it.

But you still aren’t getting responses.

Well, no one really cares how cute your subject line is. Here’s what they do care about: how credible you are, what you have to offer that will benefit them, and whether or not that offer is too good to be true.

You, on the other hand, care about streamlined emails that generate responses and, ultimately, build your business.

But you can only please your business and your prospects by warming up your cold emails. And these seven strategies are a great place to start.