The Best Time To Send an Email in 2023, According to Data

Wondering when to hit send on your emails? Whether you’re organizing your next marketing campaign or trying to reach more sales prospects, finding the best time to send an email is probably on your mind.

Email marketing has an average ROI of 4,300%. Plus, 8 out of 10 prospects want to talk to sales reps via email over any other medium.

Sales and marketing professionals know it’s important to reach the right people at the right time — by getting those email send times right. That’s why we collected data from the latest studies on the best days and times to send emails in 2023

Use these findings as a jumping-off point. The most important thing to keep in mind is your specific audience. To help you narrow down the best times for you, we also compiled tips on testing for the best email send time for your audience.

Scroll through each section or jump to a chapter below. 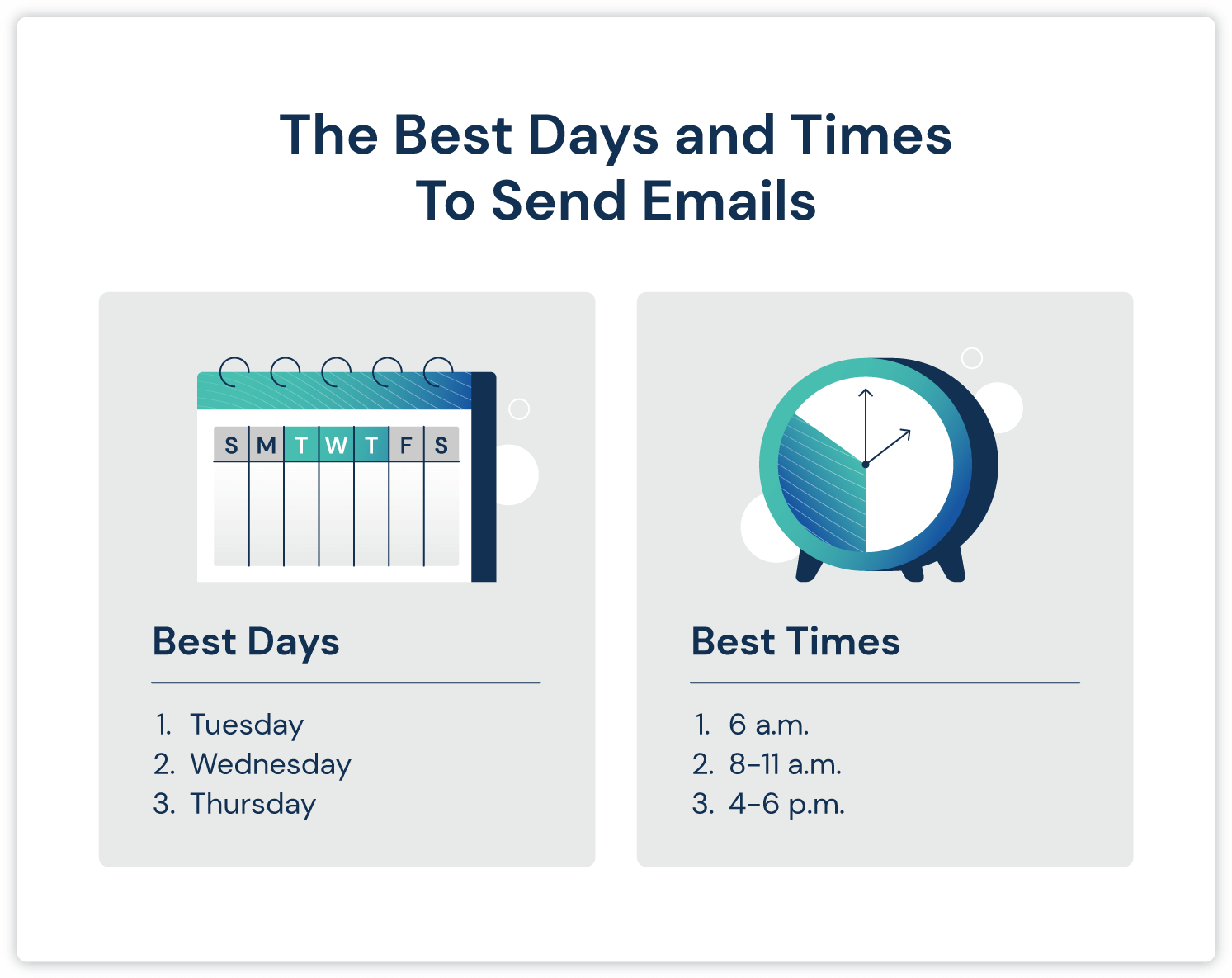 What Is the Best Day To Send an Email?

First off, what’s the best day to send an email? Though the studies show varied results, many of them found that emails delivered on Tuesday yielded the best results.

Many people think that Monday, the fresh start of the week, is the best day to send out emails. However, most of the data points to Tuesday. That’s likely because many people are flooded with emails on Monday morning and have a more cleared-out inbox by the second day of the week.

A more recent analysis of 10 billion emails by Moosend found that Thursday is the best day to send emails for the best open rate. Tuesday was ranked the second best day.

Omnisend’s analysis of 2 billion promotional campaigns showed that the best day for orders was Thursday, followed by Tuesday.

An analysis of 7 billion emails sent in 2021 by GetResponse showed a bit of conflicting data — there’s not actually much difference in engagement between emails sent on different weekdays. That said, they did see a slightly higher open rate on Monday and Friday.

A still widely cited 2013 study by Experian found that Saturday and Tuesday are best for open rates. Interestingly, Sunday had the best click-through rates according to their findings.

So, what’s the takeaway from all this?

Based on these studies’ various findings, we can rank the best to worst days to send an email as: Tuesday, Thursday, Wednesday, Monday, Friday, Sunday, Saturday. To put it simply:

We can also break things down by best days for different metrics.

You’ll definitely want to test for the best day for your specific audience. But according to the majority of these studies, your best bet will likely be in the middle of the week, from Tuesday to Thursday.

What Is the Best Time To Send an Email?

Here’s a graph showing the best times that each study found:

Even though the results are varied, we can conclude that early morning, from around 6 to 11 a.m., is effective, as is later in the afternoon, from around 4 to 6 p.m.

According to this data, you’re more likely to reach people as they’re first checking their inbox in the morning or as they’re winding down at the end of the workday.

In terms of time zones, stick with the region where most of your audience is located. If you’re trying to reach people all over the country, remember that 50% of the U.S. population is located in Eastern time, so that’s probably a safe bet.

What Is the Worst Time To Send an Email?

There’s one thing most of these studies agree on: Saturday is the worst day to send emails, followed by Sunday. However, some studies suggest trying to reach people over the weekend because of lower email volume. Again, you can always test this out with your audience.

The worst time to send an email is around 12-3 p.m., the middle of the workday, and, of course, in the early hours of the morning (from around midnight to 3 a.m.). No one wants to get an email notification at midnight.

How To Test the Best Day and Time for Your Audience

Now that we’ve looked at the data, you can use it as a starting point for deciding when to send your emails. However, the most important factor at play is your audience and industry. Blindly choosing an “optimal” send time isn’t going to yield excellent results if you aren’t also factoring in your specific customer base.

Use your existing email reports to test different send times and take a data-driven approach. Use that data to find the days and times with the best results. Then, A/B test the same email at different times.

If you have a decent response rate, you may be tempted to stick with one tried-and-true day and time. However, it’s important to A/B test to determine if there’s a chance you can improve your results.

To A/B test, you’ll need to send out the same email at different times and track your open rates. Keep the testing simple and only change one small factor at a time — for example, the day of the week or the time of day.

This takes some additional work, but tracking the data will help you evolve your strategy and improve your successful cold email outreach.

Sendinblue’s analysis shows that Wednesday at 4 p.m. is the best time to send marketing emails.

However, you’ll want to test for your specific industry and customer base to determine the ideal time to send out your email marketing campaigns.

Based on the number of orders per email, Omnisend concluded that 4 p.m. was also the winning time for sales emails.

However, you’ll need to consider who you’re sending those emails to. If you’re trying to reach high-level executives, keep in mind that they may be more likely to check emails on the weekends, and that they’ll have a higher volume of emails to get through on a typical workday.

How To Get Higher Email Open Rates

Email open rates are going to vary by industry. According to the latest data from GetResponse, here are the industries with the highest open rates:

Here are the industries with the lowest open rates:

With this information in mind, you can improve your open rates across industries with the tips below.

Subject lines are no small matter when it comes to email open rates — 47% of emails are opened or discarded based solely on their subject line. Here are some tips for optimizing your subject lines:

Email automation tools can be a game changer when it comes to improving your response rates. In marketing, automated emails that are triggered by a customer’s behavior are proven to get higher open rates and responses, with an open rate of 35.6%.

Automating sales prospecting through tools like Mailshake can help sales teams send out significantly more emails while still keeping personalization top of mind. You can customize your sending schedule based on time zones and other factors. Useful features like mail merge, sequences, and automatic follow-ups can drastically improve your outreach efforts. Plus, with Mailshake you can easily A/B test and monitor clicks, opens, and replies all in one place.

Still have lingering questions on sending emails? We’ll answer several commonly asked questions on the best times to send an email below.

What Is the Best Time of Day To Send an Important Email?

According to various studies, the two best times to send an important email are between 8 and 11 a.m. and between 4 and 6 p.m.

Does Time Matter When Sending an Email?

Send time definitely matters when it comes to emails. For example, if your email pops up in a prospect’s inbox on Monday morning, at the same time they’re being flooded with lots of other emails, yours is more likely to go ignored. However, if you send an email on Tuesday morning or in the afternoon during that prospect’s down time, you’re more likely to reach an emptier inbox and grab their attention.

Is It Unprofessional to Email Late at Night?

Typically, it’s considered unprofessional to email late into the night.

However, this may not apply if you’re emailing over the weekend — one HubSpot study found that on Sunday, email opens peak at 9 p.m. That’s likely due to professionals checking their inboxes in preparation for the start of their workweeks.

What Is a Good Open Rate for Emails?

The average email open rate across industries is somewhere around 21%. However, a successful open rate will look different across different fields.

What Is the Best Time To Send an Email Blast?

Your audience should come first when deciding when to send out an email blast. Keep in mind any promotional timelines, like sales or special deals, or upcoming holidays. If you’re unsure where to start, consider that between 8 a.m. and 6 p.m. gets the best open rates.

What Is the Best Time To Send an Email Newsletter?

One study found that the beginning of the month has better email marketing performance, particularly the fifth and 12th day of the month. However, this will vary depending on holidays and weekends, so consider sending newsletters in the first or second week of the month.

Put these studies to the test by experimenting with your email send times and tracking the results. Then, go one step further and take the guesswork out of your emails with Mailshake. Schedule a demo to learn how to automate your team’s cold outreach and send personalized emails at scale today.