How to Build a Relevant, Dynamic List of Prospects

Email marketing works. But that doesn’t mean it’s easy. In fact, without the proper strategy and process, it’s hard.

How hard? Well, the average person receives 126 business emails a day. With email open rates typically ranging from 15-25%, that means only around 30 of those emails will ever be opened.

Mark Colgan, Chief Revenue Officer at TaskDrive, tells us how.

If you’re going to build dynamic prospect lists, you first need to understand the importance of affinity groups. In other words, cohorts of people connected by a common interest or purpose. Because basic audience targeting – defining your ICP and persona, and finding people who match up to those criteria – just doesn’t cut it anymore.

Mark explains it this way: of your total addressable market, only 3% are actively looking to buy. Another 7% are open to buying. “That leaves 90% who aren’t interested in buying. If you’re just doing persona-based messaging or targeting…only 10% of them may actively be buying. The rest aren’t.”

That’s why you need to get smart and go after prospects based on more than just their location, job role, and company size. You need to understand the indicators that show someone is ready to buy from you right now. And you need to find affinity groups of people displaying those indicators.

How to Identify and Reach Your Affinity Groups [3:10]

Mark has put together 14 playbooks for targeting your affinity groups. But before we talk about those, you need to understand the four key steps to reaching those all-important prospects who are demonstrating buying signals:

Mark talked me through two of the playbooks he’s developed for prospecting to affinity audiences.

You know all those thought leaders and influencers who are relevant to your customer base? With a little effort and smart thinking, you can tap into their audiences and turn them into your affinity groups.

Let’s say we’re a marketing attribution software provider. Using platforms like LinkedIn, Quora, Slack, and Facebook, we can easily find people who are almost putting their hand up to express their interest in topics that are relevant to our business – such as “marketing technology”. Then we can use a tool like Phantombuster to scrape their details.

The first step is to find a popular topic among the members of the marketing technology affinity group. Mark searched for “martech” on LinkedIn and found several posts from Scott Brinker, a well-known marketing technologist. He looked for posts Scott has shared that received high engagement: “Anything over 100 likes or comments is a pretty good benchmark.”

Next, he pulled those posts together into a spreadsheet…

…and ran it through Phantombuster’s “LinkedIn Post Likers” tool. The instructions are pretty self-explanatory, but don’t forget to paste in the spreadsheet and remove all duplicates from the profiles to ensure that the same person doesn’t receive multiple different messages – that just looks clumsy. This is how the results look when they’ve been downloaded from Phantombuster:

Go through these names and see if there are people that don’t fit your buyer persona or the ICP. For instance, the highlighted example above is a student; they might be interested in marketing, but they’re probably not an ideal customer.

Now it’s time to enrich your list with additional information – a post topic, email address (which you’ll need to research and verify), and their first and last names separated into two columns. This is also the point where you should put together the intro and “P.S.” sentences for your email outreach campaign:

You’ll notice that Mark references the fact that the prospect liked Scott’s post, which helps to make the message super-targeted. This is crucial; your list could have hundreds or thousands of names in it, and – unless the lifetime value of your customers is sky-high – you probably won’t have time to scroll through and personalize on an individual level.

Next, Mark created a “clean” version of the data, containing only key import fields, and moved it into Mailshake, which pulls through the email, first name, intro sentence and P.S. sentence:

Notice the subject line. It’s spot-on for generating interest, because it shows that we’ve looked at the recipient’s profile and it’s very personalized to them. You get very good open rates with that sort of engagement on the subject line.

This is a pretty simple, direct pitch. You’ll want to add in follow-ups, too, and make sure they add real value. Once you’re happy with your email sequence, it’s time to launch the campaign!

One final note: aim to rebuild your email list at least every couple weeks – and ideally every few days – to keep it dynamic and relevant.

Maybe social influencers aren’t the best source to track down your affinity groups. So here’s a different method that centers on finding prospects based on the technology they’re using.

Tools like SimilarTech and Datanyze allow us to build alerts for key technology installs. Let’s say we’re a CRO agency, and we’re looking for companies who’ve just installed or removed Hotjar. When this happens, you’ll need to:

In this example, we’re using the free version of SimilarTech. First, enter your criteria to create a new technology alert: 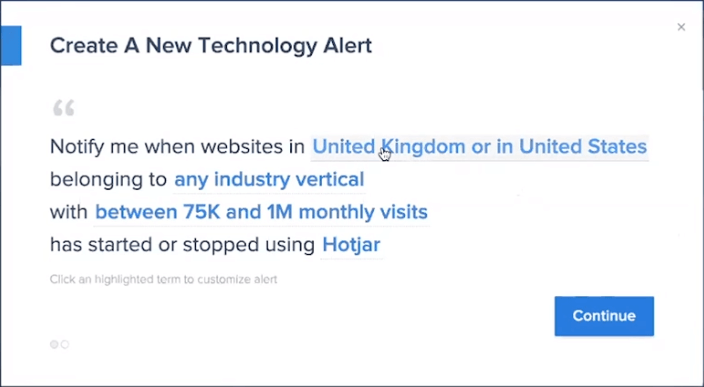 After a couple days, it comes back with the following list of companies that have added or removed Hotjar during that time frame:

Of course, they may have removed it from a test site, or they may be using a different behavioral analytics tool. But for argument’s sake, let’s say these are potential prospects for our example company. Download those details and add the raw data to a spreadsheet:

As with the previous playbook, we need to filter out companies that aren’t in our ICP. As an additional step, we also need to find the most relevant person to reach out to at each company.

Next, we’ll craft our email intro and P.S. sentences. The intro should vary based on whether they’ve recently installed or uninstalled Hotjar.

Now, we move our data into Mailshake, create our personalized emails, and add subject lines.

For those that have removed Hotjar, the subject line is: “Behavior analytics = 300% conversion increase.” So here’s our template for prospects who have just uninstalled Hotjar: 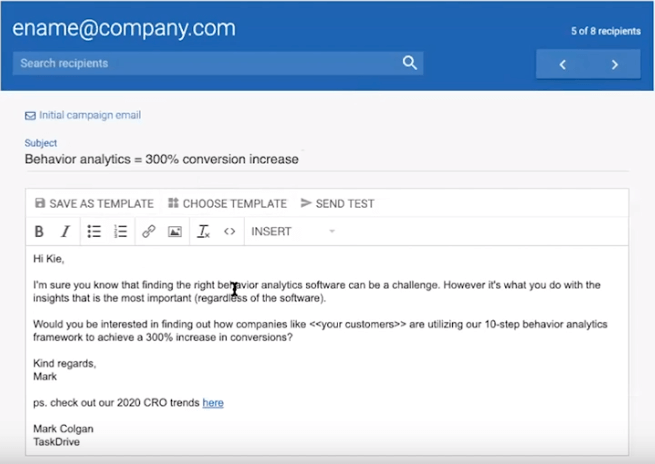 Once the emails and follow-ups are complete, we can launch our new campaign – again, remembering to update the list somewhat regularly.

So why do these methods work so well?

Mark says it’s all about the relevance: “When you base your lead research and sourcing around these triggers and signals, you receive a much higher response rate because you know that they’re likely to be having a problem, rather than guessing just by matching on job title.”